Comparative Study: Are Western Balkans ready for the EU? 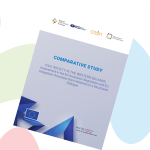 Involvement in the EU Accession Negotiation and EU Integration Processes from Initiatives to a Structured Dialogue » can answer this question and much more.

This study is conducted in the framework of the project Regional Youth compact for Europe and aims to give to the Balkan countries which are involved in the accession process to the EU, numerous elements regarding the cooperation between authorities and CSOs which can help them in this procedure. Indeed the CSOs, with acquired expertise on specific fields, have the possibility to bring analyses and methods which could be lacking in these countries. The future fulfilment of the chapters of the acquis 23 & 24 is precisely the chance to include civil society in this decision making process.

For the general public, it underlines the difficulties encountered by each country in this procedure but also shows the recent dynamics through progress and initiatives which took place during the last years. The researches and interviews leaded in this study reveal finely where and how governmental actions would be the most impactful in the relations between CSO’s and the authorities or between CSO’s and the general public. Furthermore, the authors make a distinction on the one hand Serbia and Montenegro which are in an advanced phase of the EU integration and on the other hand North Macedonia, Albania, Kosovo and Bosnia and Herzegovina, which need more reforms in order to fulfil the European requirements.

The study was conducted by a team of regional experts and translated in 4 languages, English, Macedonian, Albanian and BHS, all languages used in the project Regional Youth compact for Europe.

Regional Youth Compact for Europe is implemented by the Center for Democracy Foundation, European ALDA network and the ALDA – Western Balkans Network for Local Democracy, CRTA, Youth Act and Sodem. This project is funded by the European Union and the Balkan Trust for Democracy, a project of the German Marshall Fund of the United States.

You can find the study in the Publication section of our Web page.

EN: COMPARATIVE STUDY – CIVIL SOCIETY IN THE WESTERN BALKANS:
Involvement in the EU Accession Negotiation and EU Integration Processes from Initiatives to a Structured Dialogue (PDF)