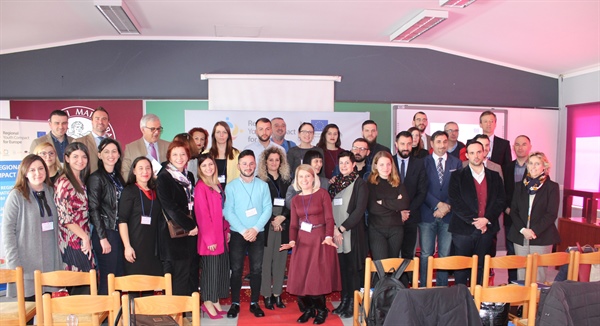 The first thematic regional forum in the framework of the project “Regional Youth Compact for Europe” was held on the 26th February 2019 in Tirana. The event was attended by more than 70 people, representatives of civil society, youth stakeholders and young people from the Western Balkans and gave opportunity to exchange on new ways to cooperate among various stakeholders in the region and stimulate collaborative activities for EU integration on a regional level.

The Forum was opened by Mr. Arbjan Mazniku, Deputy Mayor of Tirana, Mr. Sokol Dedja, Deputy Minister for Europe and Foreign Affairs, Albania and Mrs. Antonella Valmorbida, Secretary General of ALDA. Opening speeches all expressed that the way to move forward for the Western Balkans is by recognising each other’s similarities, overcoming each other’s differences and progressing together in EU integration.

The Deputy Mayor Mr. Mazniku expressed that EU integration process is not only about the technical aspects and closing the reform chapters it is much more about European values, people recognising each other and sharing together. The Deputy Minister, Mr. Dedja highlighted that negotiation chapters are about transformation of our societies and youth is the most important stakeholder in this process because youth is the future.
Mrs. Valmorbida asserted that Europe cannot be Europe without the Balkans. Joining EU means harmonisation and the chapters are harmonisation in terms of laws and procedures. “With the project “Regional Youth Compact for Europe” we are trying to show to the EU that the way to move forward for the Wester Balkans is the accession and the role of youth is key. We need an answer for the conditions in the Western Balkans societies and the answer is the EU and the moment is now.”

Other topics discussed during the Forum were the European and Regional policies for cooperation and the panellists were Mr. Djuro Blanusa, Secretary General of RYCO and Mr. Gjergj Murra, Executive Director of the Western Balkans Fund. It was highlighted that it is a very positive sign that there are already regionally established government instigated regional institutions for cooperation. Furthermore, positive practices on making the EU agenda more youth friendly were shared from representatives of public bodies and civil society from the Western Balkan countries.

The Forum is followed on the 27th February by the Annual Conference of the ALDA – Western Balkans Network for Local Democracy which will include local stakeholders from civil society, public and business sector from the Western Balkans to share their experience and elaborate future regional collaboration on the EU accession processes.

The Western Balkans are facing similar challenges and it is evident that by thinking about it together and sharing positive examples is the best way to develop and bring real beneficial change on regional level.

The Regional Thematic Network Forum and the Annual Conference is organised by Youth Act Albania, in the framework of the project “Regional youth compact for Europe” implemented by the Center for Democracy Foundation, ALDA and the Balkan Network for Local Democracy, CRTA, Youth Act and Sodem. This project is funded by the European Union and the Balkan Trust for Democracy, a project of the German Marshall Fund of the United States.